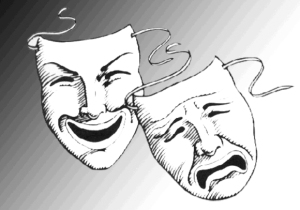 1
:  one that acts :  doer
2
a :  one who represents a character in a dramatic productionb :  a theatrical performerc :  one who behaves as if acting a part
Picture it, the year was 1992 a young man was reading the newspaper like any teenager would be doing. He sees a casting notice for a movie, Sister Act 2 to be exact and decides to ask his mom to take him to the audition. Her response “Naw boy, for what?  Now you know you can’t sing.” Devastated with not getting the chance to try out, this young fella spends his teenage years loving an art form from afar not trying any arts because of those words from his mother. Putting all his feelings into writing was how he got through, reading every book on moviemaking, acting and the like while thinking one day one day.That young man was me.
For a long time my nickname in any game was Supastar because I knew I could do it, would do it. However those words (my moms) echoed in my head for a number of years and suffice it to say, you can’t be a supastar sitting on your couch eating Doritos. I tried it.I would tell some people my plans for the future because I could talk a good game like nobodies business but follow thru was/is not my strong suit. Years of being unhappy with where my life was going (working in a kitchen for the rest of my life, umm no thanks) and getting a college degree in a field that could make money but ultimately not something i wanted nor cared to do.I got to thinking.
Youre not getting any younger, you’re already Sallie Mae’s Lil bitch. Do what you need to do. (Shout out to Oprah and Deepak’s meditation series, it also helped me figure some things out). In January, I started taking acting classes. Scary at first because of the childhood ish I suddenly remembered but then I fell in like with it. in the second class it turned to love! The world was mines for the taking, no limits were on me. I did my first acting showcase and things were gravy!
Started a third class were part of the acting is done on camera and you get to see your performance for techniques and critiques. First class I almost had a nervous breakdown, is that me on the screen? No! Oh Hell to the Naw! WTF! I kinda knew going in that I don’t have the standard black hollywood male look (chiseled by gods with platinum tools). What kind of screen roles could I go for? Just negative thoughts invading my brain for the longest time. I decided I’d be a theatre actor, I wont have to see those performances right? The long rehearsal schedules are cool if that’s all you’re doing but with a 9 to 5, it gets rough.
I was on YouTube watching some performance videos and saw an interview with Mary Mary, in it one of the ladies say “He gave YOU a gift, he doesn’t want you to be anyone else. There’s already one of us, be you and do you.” I am paraphrasing here but the message is here. Just as I was asking my angels for a message to guide me through I come across this video. I’m sticking with this class and this art form. Hard as it may seem I will never look like Micheal Ealy or Shemar Moore ( the light-skinned acting brigade) and that’s gonna have to be ok.
I went out on a limb and signed up with some fellow school mates to participate in a 48 hour film challenge. Putting together a movie in 48 hours is no walk in the park. I enjoyed it and loved the experience. Watching myself on camera is gonna be another battle, im still not used to it. Cant I be one of those actors who does films but never watches them? I’m loving the creative people I get to meet through schooling and actual shooting. I call these time capsule moments. It may never happen again but in that time, in that place, everything was as it was meant to be.I’m liking my life more now, what a great feeling!
CaesarMarques